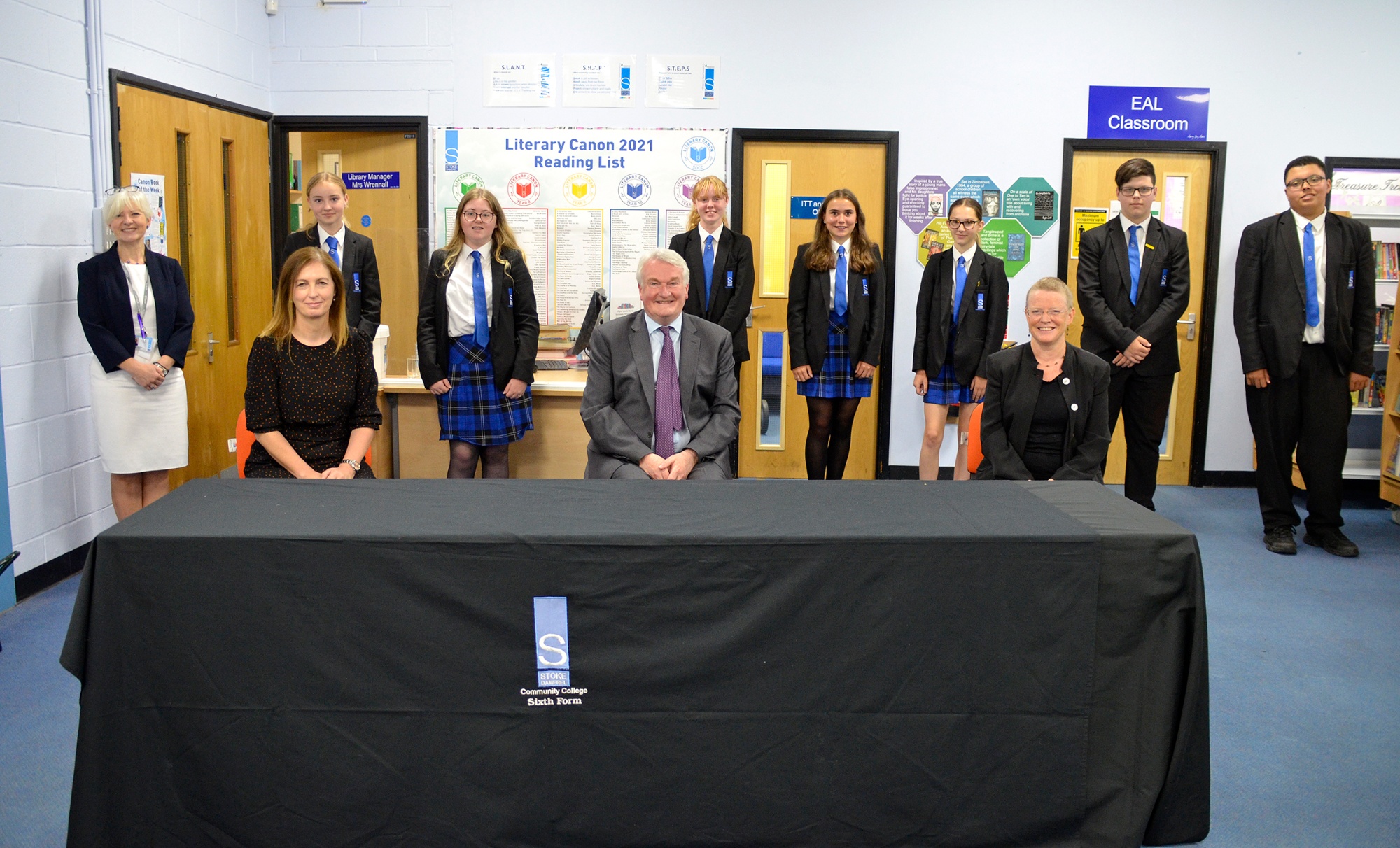 Stoke Damerel Community College was delighted to welcome Lord Chief Justice, The Right Honourable Lord Ian Burnett of Maldon to the school to talk to 25 of our students about his role as the Head of the Judiciary of England and Wales and to discuss law as a career.

The Lord Chief Justice also held a question-and-answer session with the students, from Year 10 going into Year 11 and Year 12 going into Year 13. He was joined by District Tribunal Judge Julia O’Hara and District Judge Penelope Taylor for the 45-minute event on 29 June.

He began his talk by stressing the vital importance of having a judiciary that is independent of the Government, describing it as “the bedrock” of our legal system for centuries, and that everyone is treated the same before the law. And he said: “A judge’s main role is to ensure everyone has a fair trial or a fair appeal.”

He dispelled the image of law being a “dry and boring” career, saying: “Actually, it is mostly good fun!” And he encouraged students who are interested in the law to join the profession: “So, think about the law, find out something about the law, because unless we have good people coming into law, then the whole system will flounder.”

The Lord Chief Justice discussed the career paths that are available and had this advice for our students as they consider their next steps: “My strong advice to everyone going to university is to do what interests you. And choose A Level subjects that interest you, because you will do better if you find them interesting. However, because the law is about language - we spend a lot of time reading documents and writing - you do need pretty good English.”

He explained how he visited a Barristers’ Chambers when he was studying, to get an insight into the job: “This was an invaluable experience,” he said, “and I would also suggest sitting in the back of the court and observing proceedings.”

Some of our students were particularly keen to learn about the emotional side of working in law and how to cope with distressing cases. The Lord Chief Justice said: “This is a growing problem. There are many judges who do spend a lot of their time on cases that are harrowing, particularly in the criminal and family courts. It’s vital for all of us to disengage when we come out of court - and that can sometimes be difficult. Sentencing also involves making very difficult decisions. There are some cases that are extraordinarily difficult, and some of them stay with us forever.”

He added: “In the end, the law is about people, you are trying to sort out people’s problems. I wish I had understood more about people when I started as a lawyer in my early 20s. I would like to have understood how people got into difficulty. People are in distress and it’s vital we understand why they find themselves in the position they do.” 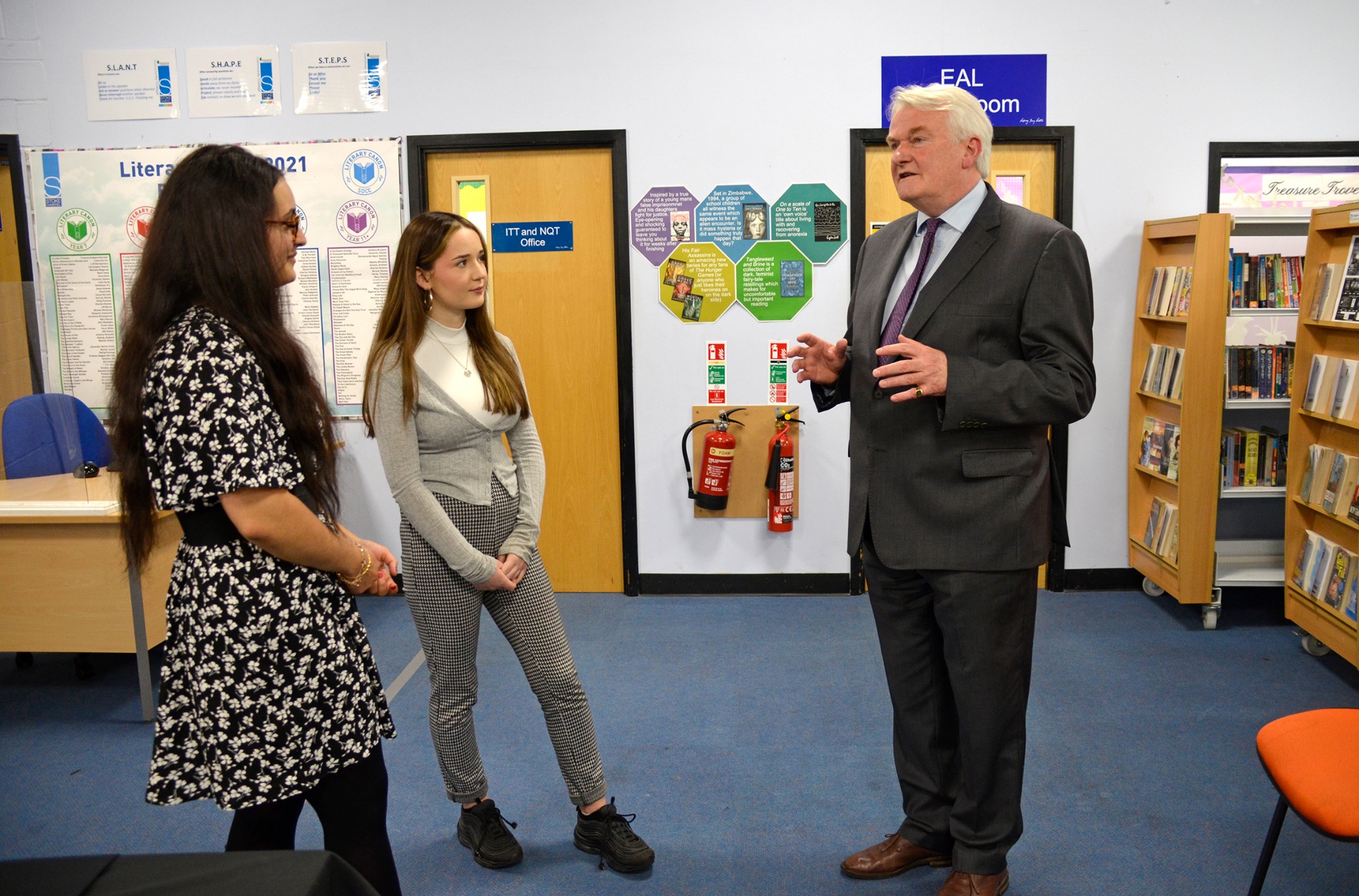 Two of our sixth formers, Soso and Lily-Mae, stayed at the end of the talk to chat further with the Lord Chief Justice as both are interested in going into law. Lily-Mae said: “It was a very useful experience to learn face-to-face, especially about the emotional side - I feel that’s not touched upon so much in books or online. And it was just a very good opportunity to talk to the Lord Chief Justice and listen to his advice.”

Soso added: “Lilly-Mae and I were saying only recently, ‘wouldn’t it be great to meet the Lord Chief Justice’ and we never thought it would happen! Hearing about the day-to-day reality of law, that was what I found particularly valuable.”

Soso and Lily-Mae were also interviewed by reporter Lucy Wilson, who was covering the Lord Chief Justice’s visit for BBC Radio Devon and BBC Spotlight.

Miss Frier said: “This event was a wonderful opportunity for our students, and we are very grateful to the Lord Chief Justice for sharing his experience and advice. We have several students who have expressed an interest in law, and this has given them a real insight into what an important and rewarding career it can be. Hopefully, it will have inspired others, too.”