The College came together for a two minutes’ silence on Remembrance Day, to pause and reflect on all those who have lost their lives in conflicts.

Our students in the Combined Cadet Force (CCF) held a parade in the playground before the Last Post was sounded to mark the start of the period of silence at 11am on Thursday 11 November. Joining the College’s 42 CCF members in the parade this year were the Army Cadet Force, Royal Marine Cadets, Air Cadets, Scouts and Guides.

The parade was led by Year 13 student, Staff Sergeant Cassie, the senior ranking cadet. She said: “It was nice to get all of the various groups involved this year, we felt it was respectful to everyone for us all to be here. Everyone was exemplary; I could not have asked for anything more.” 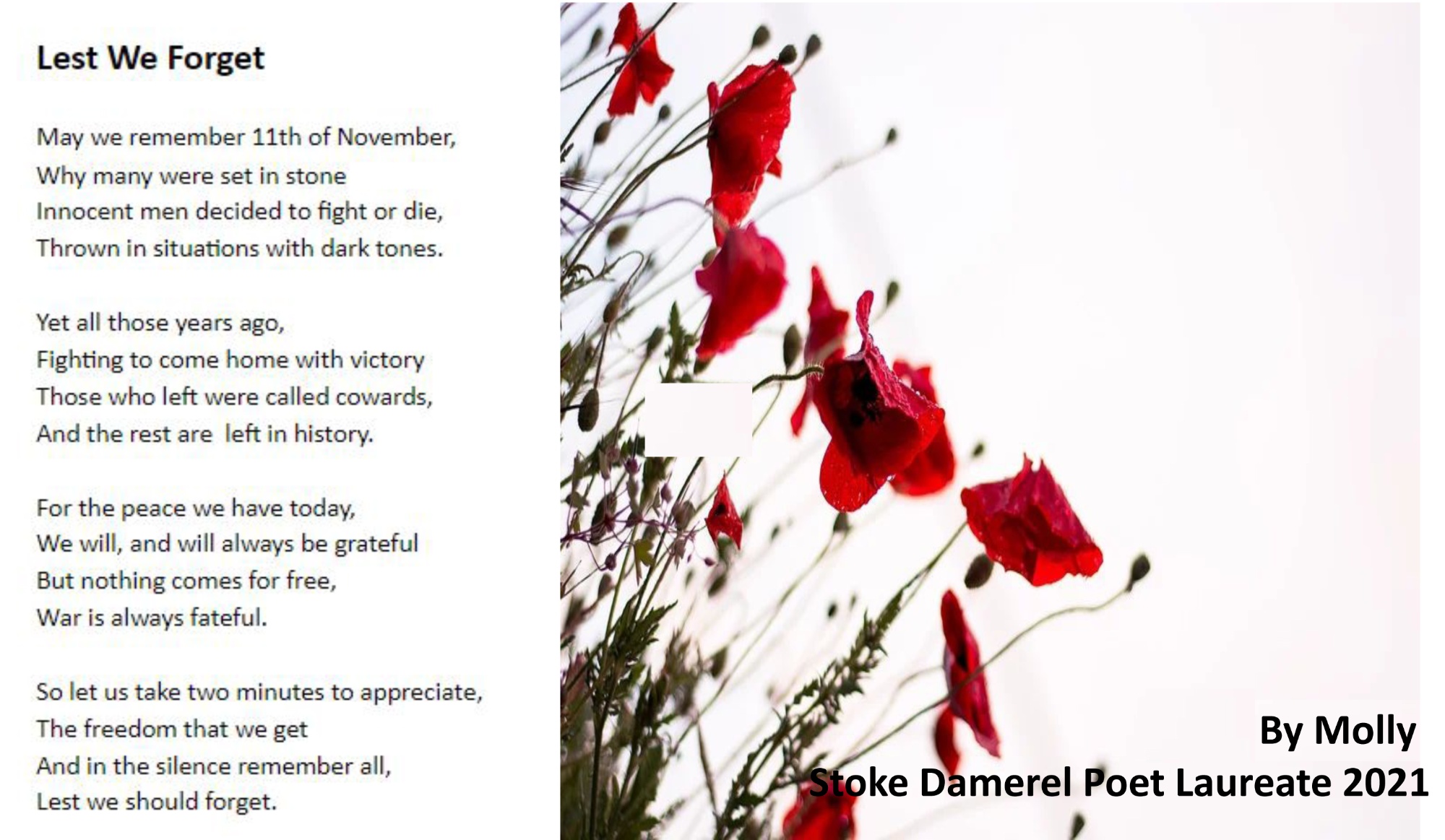 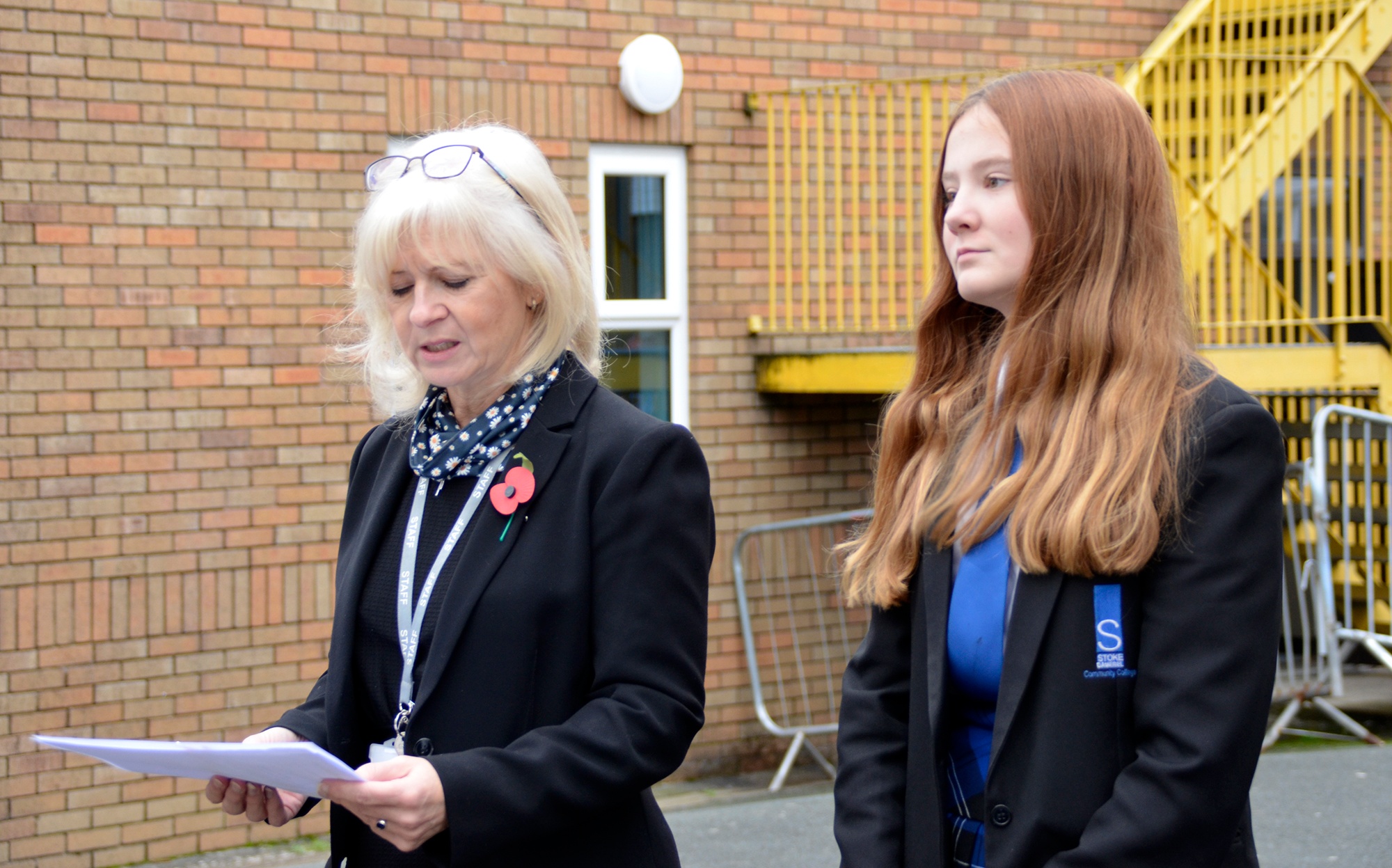 Before the Last Post and two minutes’ silence, Miss Frier read out ‘Lest We Forget’, a poem written for Remembrance Day by the College’s Poet Laureate, Molly, who is in Year 9. A video was made of the parade to be shown to the classes that were unable to attend. Those classes instead watched a presentation which included Molly’s poem. 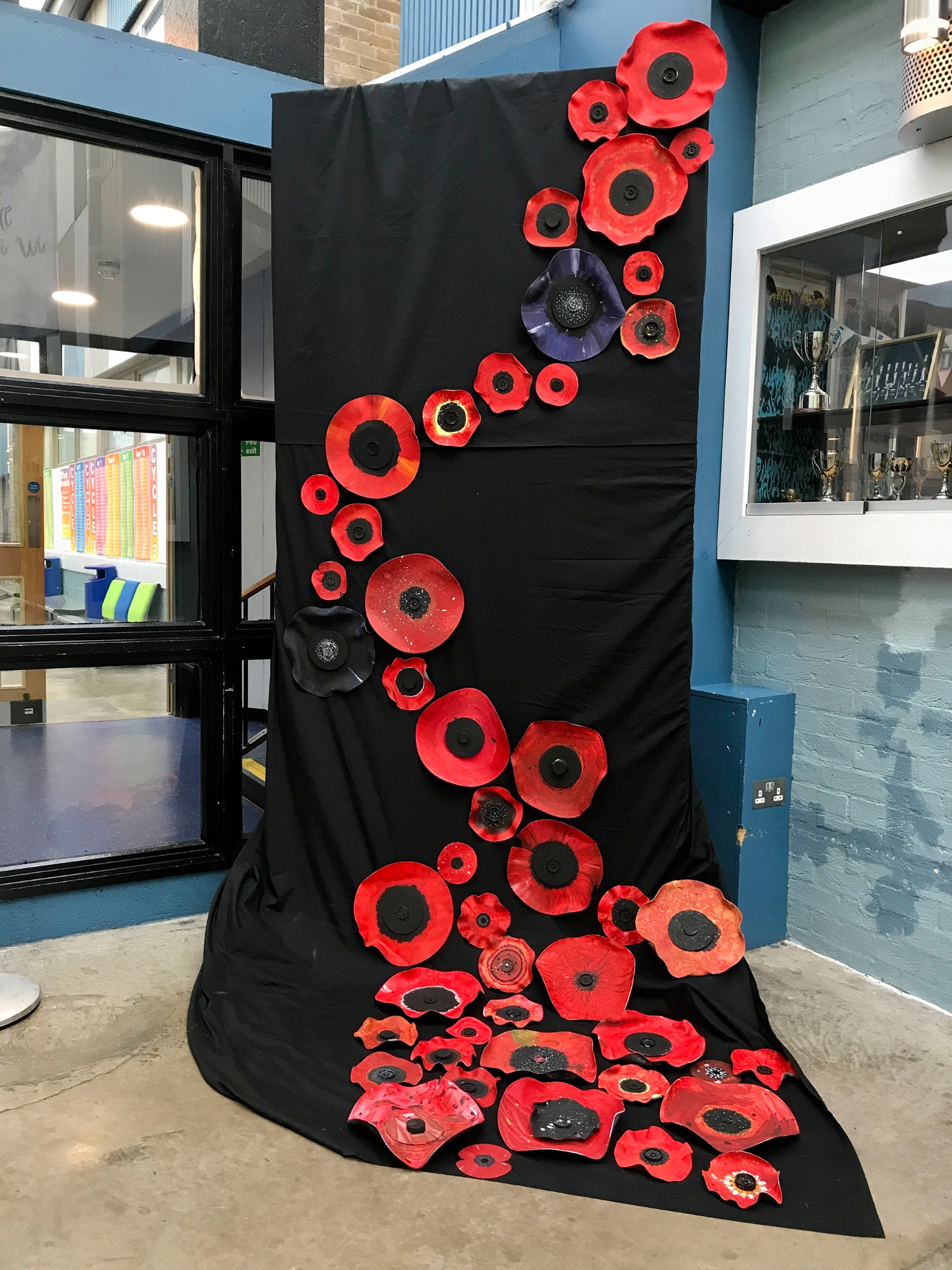 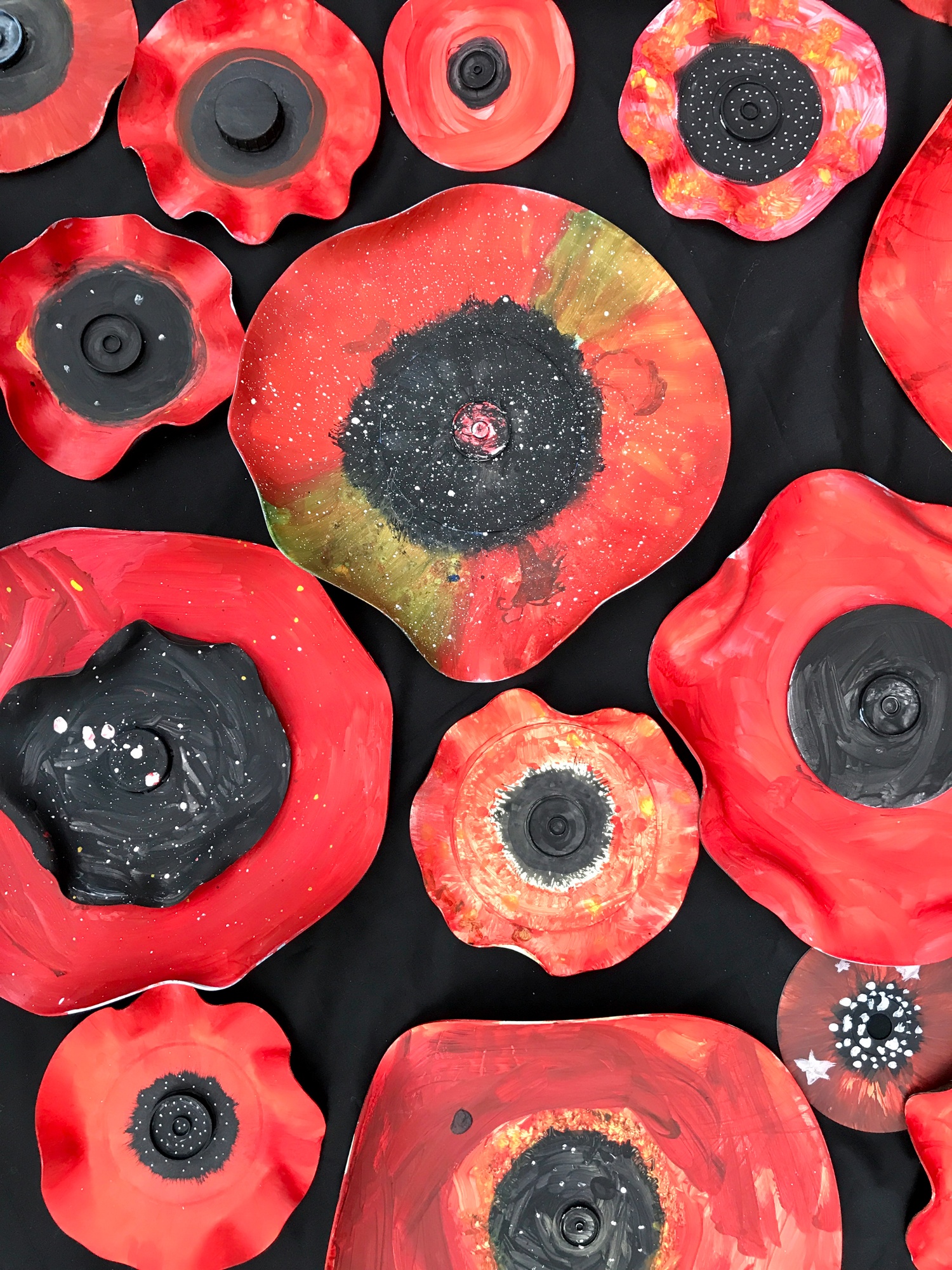 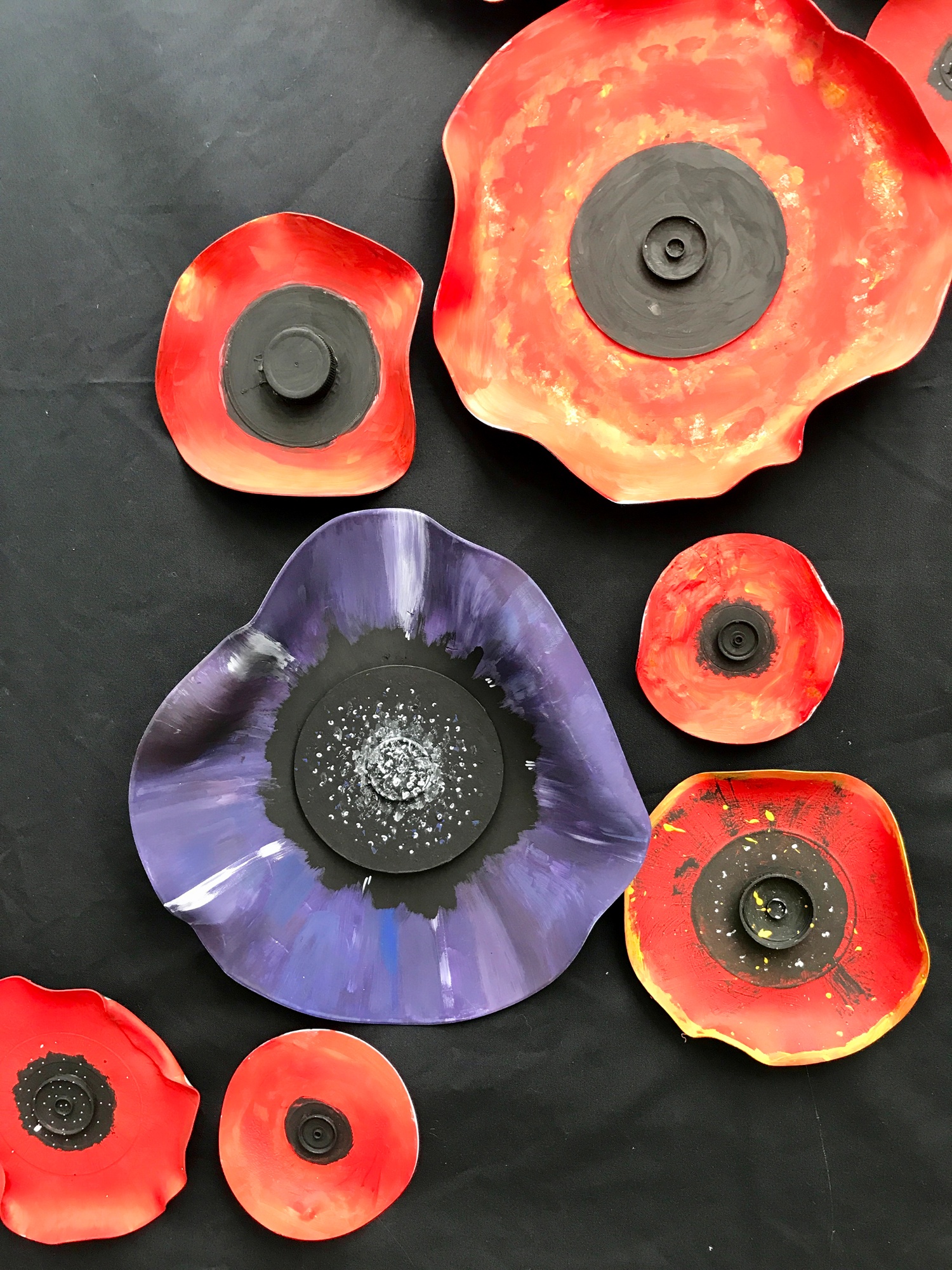 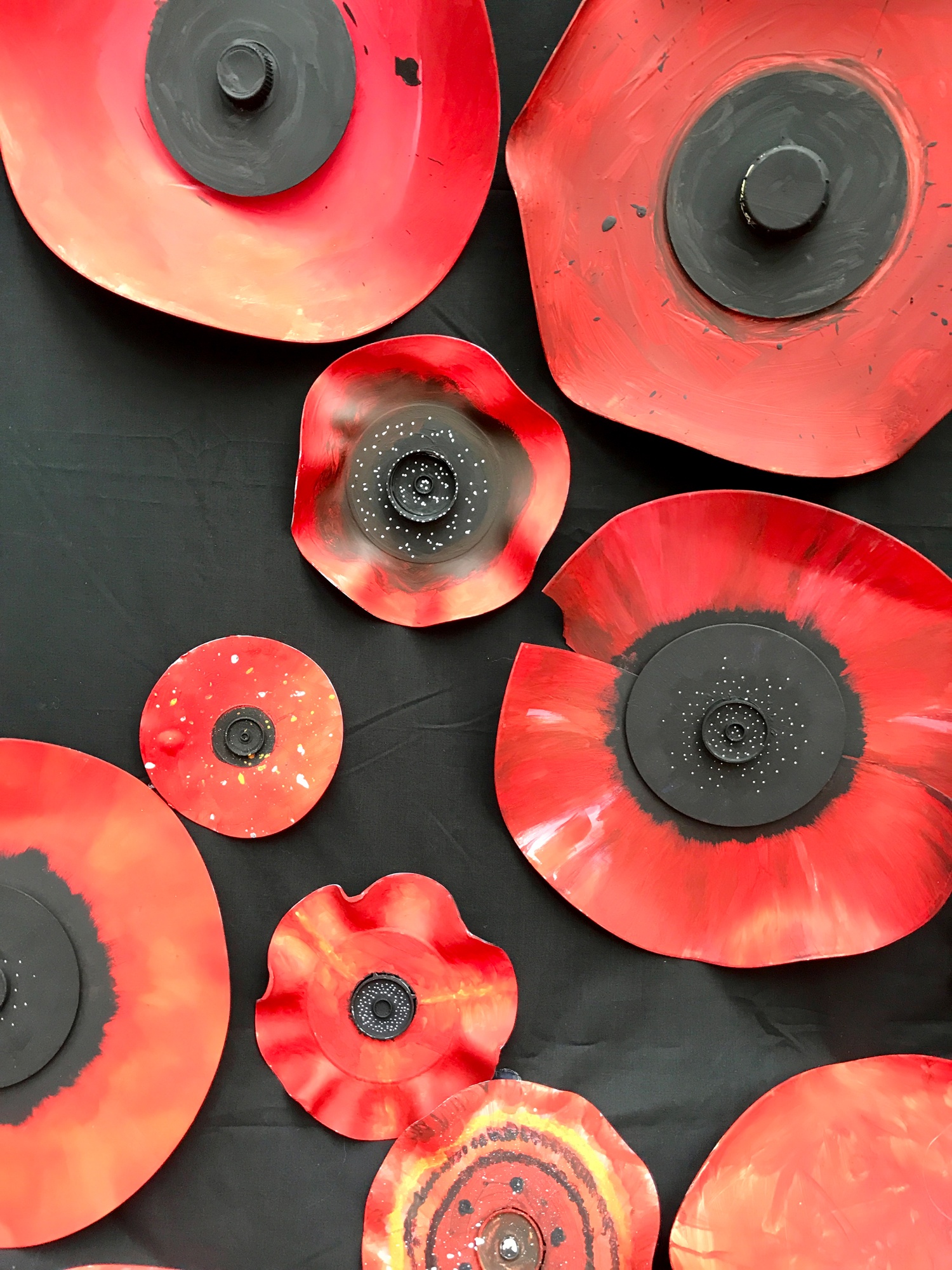 In the Steet, there were displays of work created by history students in Years 8 and 9, and poppies crafted out of old vinyl records made by Year 7 and 8 students in our Afterschool Art Club.

Miss Miller said: “Our history students have been remembering the events of the World Wars in their history lessons and through their extra-curricular activities. We hope that all of the students have found some time to come and see the EBacc display in the Street to commemorate Remembrance Day to remind everyone of the sacrifices and the bravery of the people who have fought in war.” 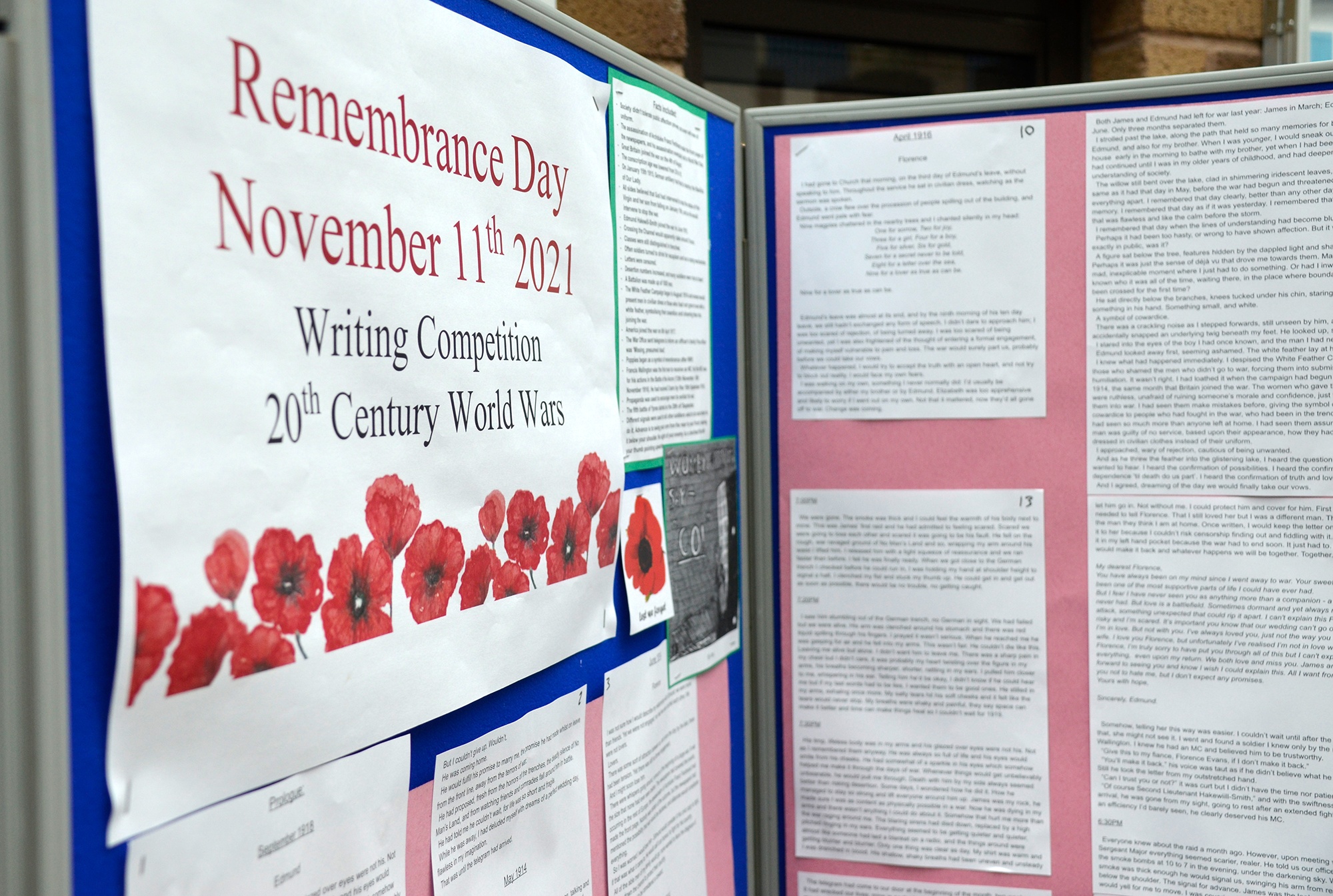 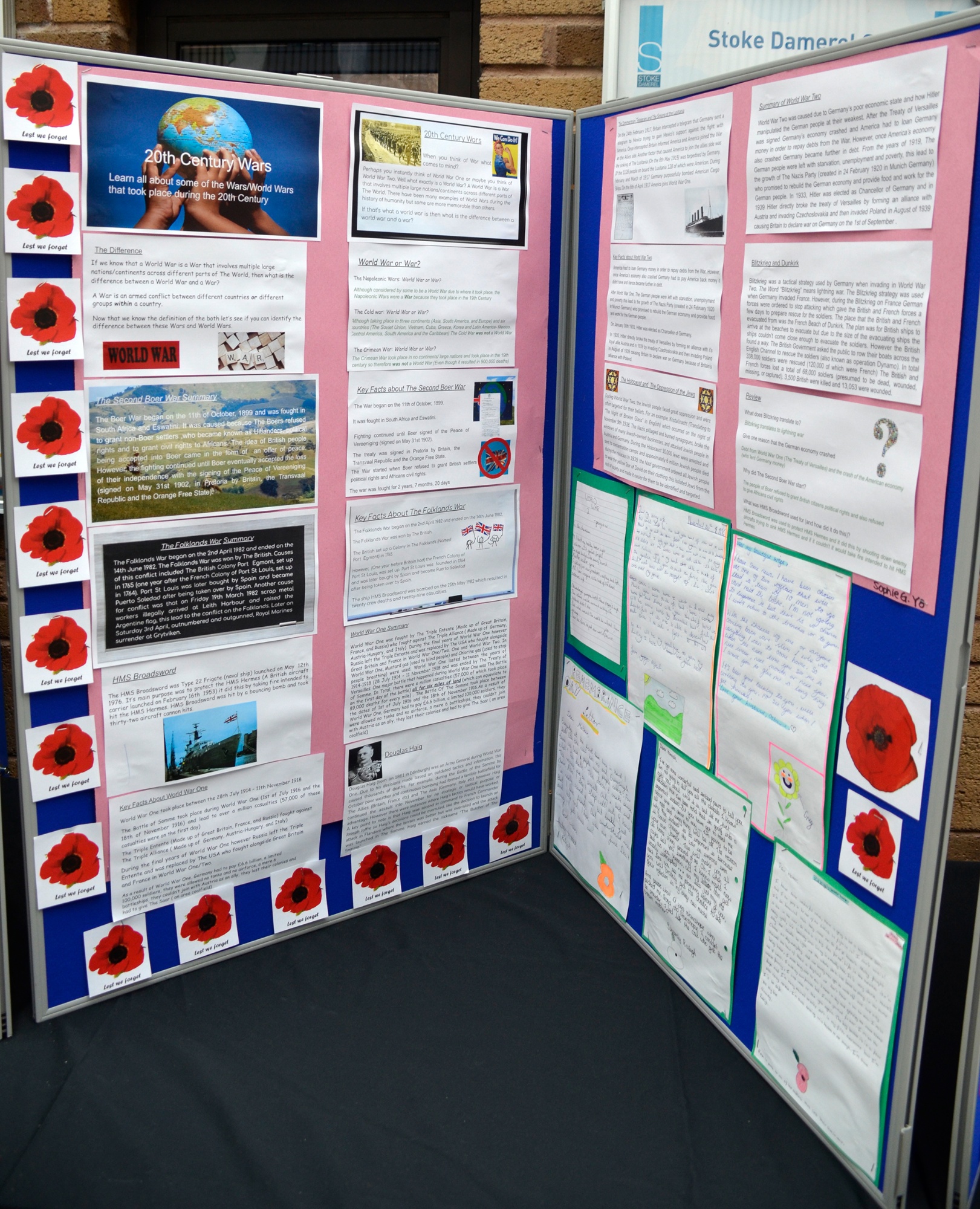 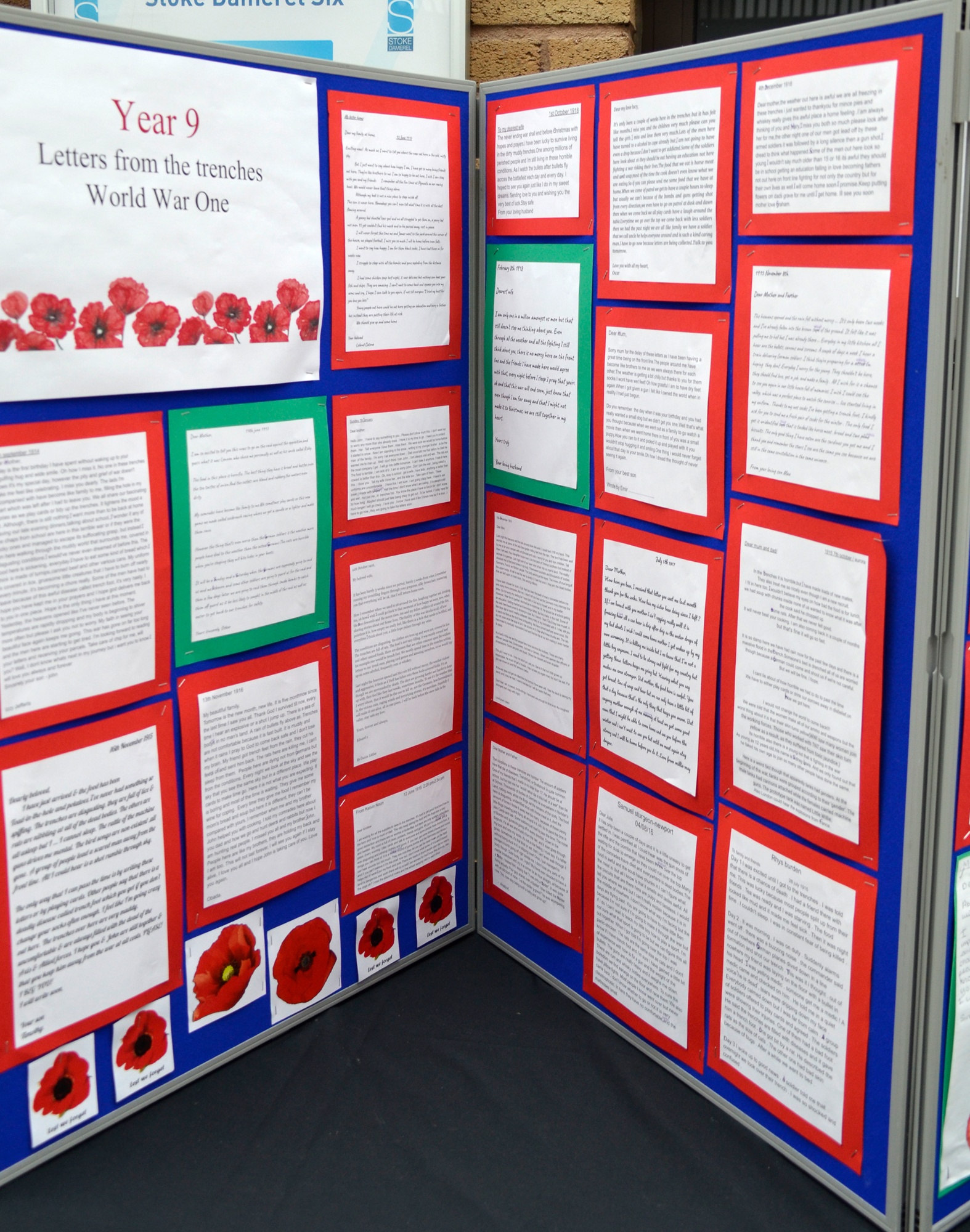 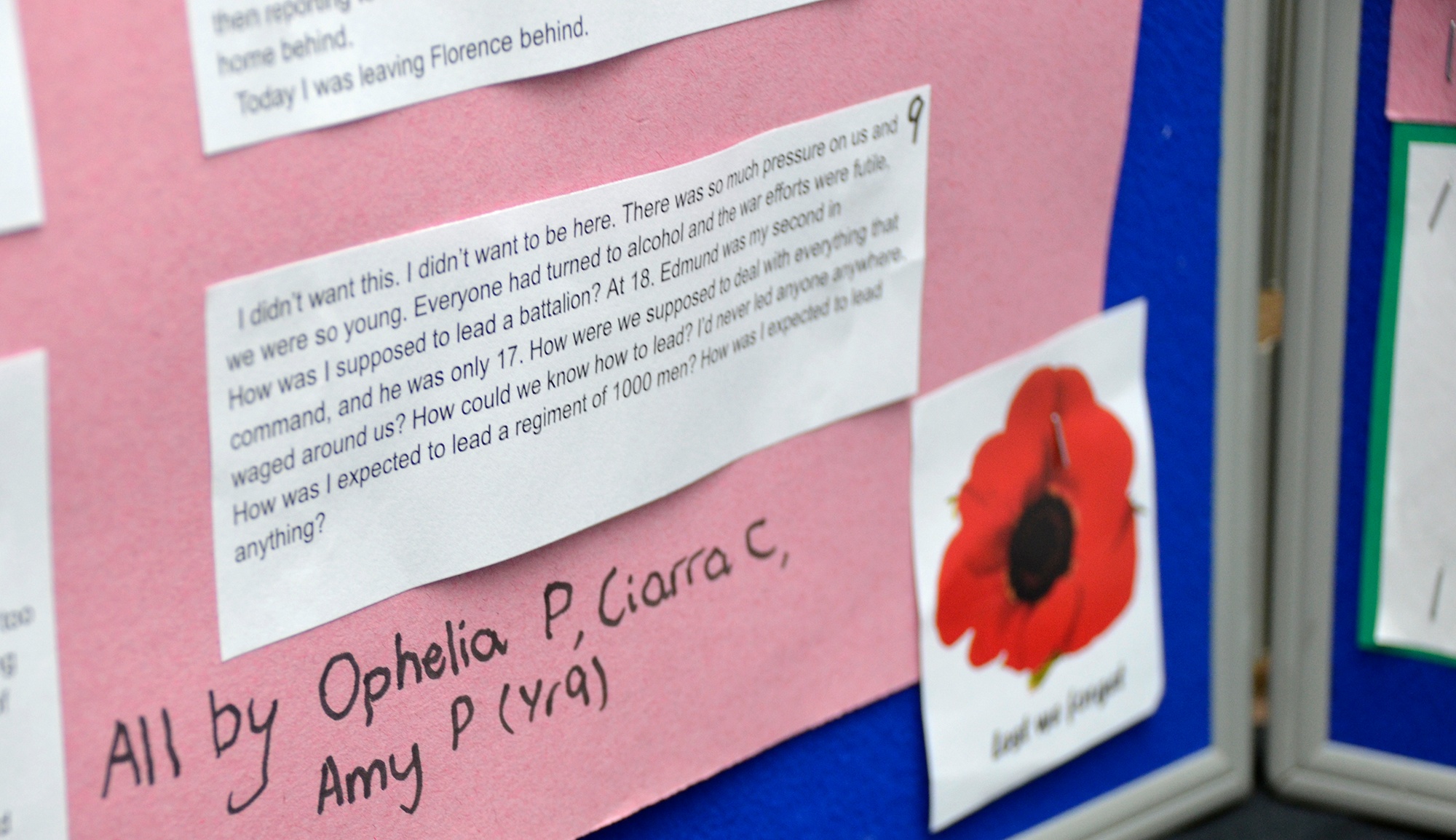 Among the pieces of work on display was an 18-page play about World War One written by Ciarra, Ophelia and Amy in Year 9. Miss Miller said: “What can I say about their piece of work? Reading their story stirred up so many emotions of the pain of war, the change it brings to people but also the comradeship and the desire to protect each other. The maturity of the writing goes far beyond their current school year, and I know this won’t be the last story I read from them!”

Also on display was a presentation created by Sophie in Year 8, and a board of ‘Letters Home from the Trenches’ written by Year 9 students. Miss Miller added: “Sophie needs a special mention. Not only has she carried out a huge amount of research into the wars of the 20th century, but she is also going to present this information to her history class in order to work towards her Character Education awards.

“Another student, Georgia in Year 7, has written a moving poem that helps to show the impact that soldiers and their bravery have had on the world we live in and why their sacrifices will not be forgotten.

“And a special mention also goes to Levi in Year 8 who has produced a video using images and song to vividly portray the sadness of war and why we need to remember it.”

Well-deserved praise, too, for our talented young artists for their amazing vinyl record poppies which they made in art club sessions with Mr Jackson. The students experimented with old vinyl records to manipulate into the iconic poppy shape. The vinyl poppies were then painted, looking at detail such as colour and tone. Mr Stephens, Head of Art, said: “The students found the vinyl records fascinating and it was interesting to form a nostalgic link between the generations.” 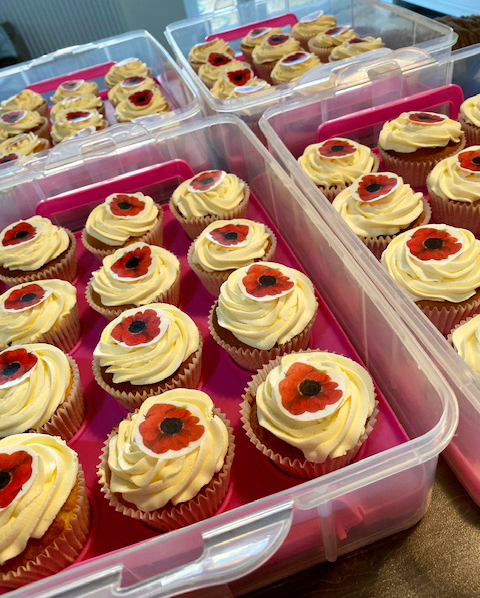 Earlier in the week, Miss Hill organised a cake sale to raise money for the Royal British Legion Poppy Appeal - you will not be surprised to hear that all the cakes sold out very quickly! Miss Hill also knitted some poppies for the cause, which also sold out.

Miss Frier said: “The standard of work on display in The Street was quite stunning and I would like to congratulate all the students who took part. The poem by Molly is also a remarkable piece of work. I am very proud of the way the whole College came together to respect and remember those who have died in wars and conflicts. It was very moving.”